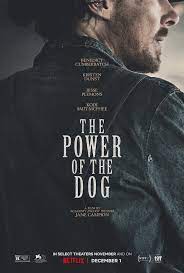 The Power of the Dog

Since Jane Campion's latest film debuted recently at film festivals in Venice (Best Director), San Sebastian (Best Film) and Toronto, it has been lauded with much critical praise and laden with expectations of further praise and awards in the upcoming season of award giving. Adapting the novel by Thomas Savage, set in the 1920s, about the Burbank brothers, Phil (Benedict Cumberbatch) and George (Jesse Plemons) on their Montana ranch. Tensions arise when George marries the widow Rose (Kirsten Dunst) and brings her and her son Peter (Kodi Smit-McPhee) to live on the ranch. Their lives progress at a meandering pace, building to the film's final reveals. Once again, Ms Campion nurtures the best performances from all of her immensely talented cast and frames the action within a majestic landscape where the characters move like repressed whispers in a vast wilderness. The film demands to be witnessed on a big screen in the dark of a cinema. PH.

"It's a film which shimmers with intelligence, and if the plot isn't clear until the very last scene, well, it's worth the wait. When that scene arrives, the purpose of every previous scene snaps into sharp focus, leaving you with the urge to go back to the beginning and watch the whole thing again." - Nicolas Barber, BBC