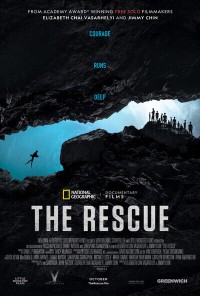 "During the summer of 2018, the world was riveted by the saga short-handed to “Thai cave rescue”: 12 boys and their soccer coach trapped inside a flooded cave system, with little hope to make it out alive. The internationally organized rescue effort provided epic headline-grabbing drama, including a tremendous and rather surprising happy ending, which means that, naturally, movie producers were chomping at the bit to adapt the story. I’ve lost track at this point as to how many films and TV series are in production – last year saw the release of Tom Waller’s limp drama The Cave, and next year promises Ron Howard’s shinier and better-financed Thirteen Lives – but everyone should just stop right now: Jimmy Chin and Elizabeth Chai Vasarhelyi’s documentary The Rescue is the be all and end all Thai cave rescue project. Whereas the directors’ last project, the Oscar-winning free-climbing doc Free Solo, chronicled an open-air kind of anxiety, The Rescue is a claustrophobic exercise in tension, expertly assembled for maximum emotional impact. The film may be traditionally structured – this is a tick-tock thriller chronicling the event from beginning to end, with little room for abstract cinematic detours – but it captures all the human drama and daunting logistics with a sharp, unflinching eye."  - Barry Hertz, The Globe and Mail. Highly Recommended.