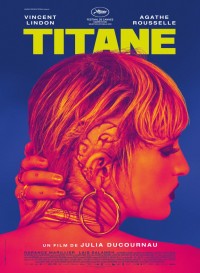 I don't know if the grand prize, Palme D'Or winner, at Cannes has ever won the Audience Favourite in TIFF's Midnight Madness program, but I'm not sure I've watched too many films as outrageous as Titane before. In the follow up to her debut work, the comedic zombie film Raw, Julia Decournau seems to have channeled the works of David Cronenberg, Gaspar  Noé and David Lynch, with a tip of the titanium noggin to Alien as well.
Let's consider these two mini reviews posted in the same paper during TIFF 2021,
"It’s rare to find a horror film that truly shocks. In what the BBC called 'the most shocking film of 2021,' Titane centres around a woman (Agathe Rousselle) who has sex with cars after growing up with a metal plate in her head from a car accident. If you can stomach [extreme] violence, extreme sexuality and stories that don’t make any sense, this bizarre, French, monster-car-ride of a film experience might be for you." - Aruna Dutt, The Globe and Mail.
Or, "Haven’t we seen this before? A female erotic dancer with a titanium plate in her head has sex with a car, murders people with a hairpin and pretends to be the missing son of a steroid-abusing fireman. In the hands of a lesser director, this tired trope could easily go sideways. French director Julia Ducournau, however, delivers a mindblower that keeps you guessing for all of the film’s excellent 108 minutes. She shocks; she entertains; she wickedly defies expectations." – Brad Wheeler, The Globe and Mail.
In French with subtitles