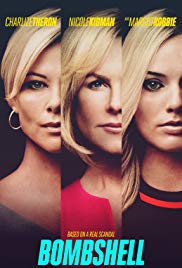 Bombshell is the story of a small group of women who expose their toxic workplace at Fox News and the sexual abuse of the network’s head, Roger Ailes. This tale of workplace rebellion comes to life thanks to the A-list cast of, Margot Robbie, Charlize Theron, Nicole Kidman, John Lithgow, Allison Janney, Malcolm McDowell, and Kate McKinnon. “Bombshell is a scalding and powerful movie about what selling, in America, has become. The film is about selling sex, selling a candidate, selling yourself, selling the truth. And about how at Fox News all those things came together.”—Owen Gleiberman, Variety