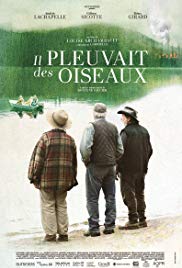 And the Birds Rained Down

“And the Birds Rained Down homes in on a loose alternative family of oldies and drifters living in the backwoods of Quebec. A quiet, gentle film about emotional and geographic exile, this melancholic charmer is a choral character study whose slow pacing matches the unhurried lifestyle of its protagonists. There’s a resonance to the film’s probing of lost and found love, age and displacement. In a beautifully shot opening sequence, we are introduced to a trio of white-haired old men who live in cabins in the woods and bathe together in the lake. Ted (Kenneth Welsh) is a taciturn painter who traps rabbits, Tom (Rémy Girard) is a guitar-strumming musician and singer, while the wary Charlie (Gilbert Sicotte) seems to be the unofficial headman of the group, and the one who, at first, most fiercely defends them from outsiders. Steve (Éric Robidoux), a thirty-something who owns a hunting lodge nearby, is the only one allowed into their woodland realm to deliver supplies. Through him, two outsiders arrive to disturb the fragile equilibrium. One is Steve’s elderly aunt – Gertrude (Andrée Lachapelle), a long-term resident of a psychiatric institution. The other is Raf (Ève Landry), a female photographer who is compiling testimonies of the ‘Great Fire’ that happened at some point in the past and taking portraits of the survivors. On one level, And the Birds Rained Down (that’s what happened during the Great Fire, it seems) is a small bucolic drama about a group of misfits who re-create a more caring society away from society. But it’s also about the importance of individual and collective memory, about whether we have a right to disappear or a duty to bear witness.”—Lee Marshall, Screen International. Recommended. In French and English with subtitles.