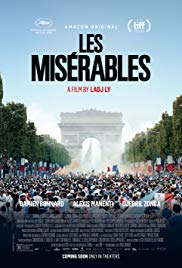 The film takes its title from Victor Hugo’s work, set in the same Montfermeil district of Paris, where ages ago a revolution was born against an oppressive social system. Here, two veterans of the police anti-crime brigade introduce a newcomer to their way of policing. But their beat is populated by immigrants who are finding their voices and losing patience with the old world politics and the gun-toting privilege and cowboy tactics of the cops. A series of small incidents occur in the aftermath of France’s victory in the World Cup and things quickly escalate to a heated and violent confrontation. Like the best cop film thrillers, Les Misérables brims with menace and building tension leading to an action-packed climax. Fast, gritty and smart, Les Misérables is Recommended. French with subtitles.