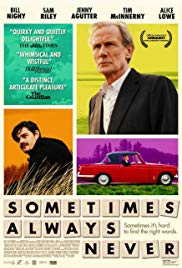 “There’s a beguiling Englishness to this elegant, offbeat comedy-drama, terrifically written by Frank Cottrell-Boyce (Hilary & Jackie, Millions, 24 Hour Party People)... Bill Nighy plays Alan, a retired Merseyside tailor (and Scrabble wizard) and he nails an engaging and consistent voice, sounding like a kind of donnish Ringo Starr. The actor shows how his character, a formidable and quietly intelligent man, has retreated into his habits and eccentricities to shield himself from the cares of the world. Long ago, Alan’s favourite son left home, never to return. In the decades since, Alan has searched for him, a quest that has sparked mixed feelings in the heart of his other, now grownup son Peter (Sam Riley) who feels that he was always second-best.” - Peter Bradshaw, The Guardian.