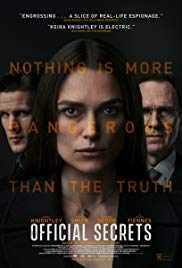 “Based on the book The Spy Who Tried to Stop A War, Official Secrets tells the true story of British secret-service officer Katharine Gun, who during the immediate run-up to the 2003 invasion of Iraq leaked a top-secret National Security Agency memo. The memo - which exposed an illegal US/UK spying operation against members of the United Nations Security Council - proposed blackmailing smaller, undecided member states into voting for war. Writer/director Gavin Hood (Eye in the Sky) masterfully dramatizes these real-life events and brings Gun to life as an ordinary woman in an extraordinary situation. By slowly revealing specific details and lingering on pivotal moments, Hood creates an intense atmosphere that captivates you until the very end and begs the question: what would you do?” - Sundance Film Fest. Starring Keira Knightly, Matthew Goode and Ralph Fiennes. Recommended.