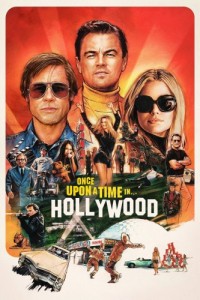 Once Upon a Time... in Hollywood

Quentin Tarantino’s latest film is a lengthy, languorous and lovingly detailed love letter to a bygone era of Hollywood films and American television—an era that many would say crashed to a senseless and bloody ending with the Manson murders of 1969. Tarantino exhaustively recreates every minute element of the Hollywood fantasy factory, from the cars to the clothes, the studio backlots and soundstages, gradually giving way to an ever-creeping tension, sensing the carnage that we know from history. As with any film from QT, we’re in for extreme (some may say, self-indulgent) attention to detail, and elaborate set piece scenes with offbeat dialogue and fabulous performances from A-list stars and lesser-knowns. And, as the “Once upon a time…” of the title infers, it’s a modern fairy tale set in the not-so-distant past of America’s land of illusion.