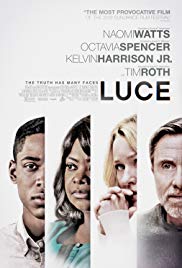 Prepare for the wave of great reviews and online reactions. “Anchored by standout performances by Naomi Watts, Octavia Spencer and young Kelvin Harrison Jr., Luce is a strong indie film about race, family and trust that should connect with fans of smart, provocative cinema.” —Stephen Whitty, Screen Int’l. Luce (Kelvin Harrison Jr) was born in Eritrea and trained as a child soldier before being released and adopted by Amy (Naomi Watts) and Peter (Tim Roth), loving, upper middle class parents who raise him in their Virginia home. We meet Luce as a thriving high school student, star academic and captain of the basketball team. When Ms Wilson (Octavia Spencer), a teacher at the school, finds contraband while snooping through Luce’s locker, it opens a hornet’s nest of prejudices and accusations—racial and otherwise. “...it is a tense, knotty puzzle... a drama that moves like a thriller with a stark, uncomfortable score and a series of seat-edge confrontations heating up a difficult debate over trust, expectation and racial stereotypes.”—Benjamin Lee, The Guardian. “The film is sleek and shadowy...driven by stellar performances across the board.”—Peter Debruge, Variety. It looks like Luce comes Highly Recommended.