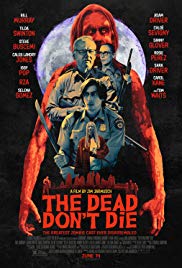 Leave it to cinema’s King of Cool to tell the story of polar fracking unleashing an army of the undead into the unbalanced world. As the zombie hordes descend upon Centerville, the three-person police force and citizens do their best to survive. Mr Jarmusch assembles his usual all-star ultra cool cast including, Bill Murray, Chloe Sevigny, Adam Driver, Steve Buscemi, Danny Glover, Selena Gomez, Tom Waits and Tilda Swinton. What a bloody funny orbit of stars.