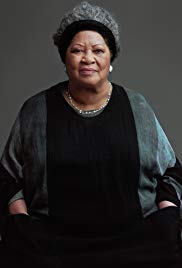 Toni Morrison: The Pieces I Am

“Toni Morrison’s artistic, cultural and historical legacies are by now firmly established, which doesn’t prevent Toni Morrison: The Pieces I Am, from revealing them anew and setting them out in an appreciative, and appropriate, package. An eloquent nonfiction biopic that travels creatively through the past, Timothy Greenfield-Sanders’ film is enlivened both by its own storytelling dexterity and by the participation of its subject, who at 87 years old remains as warm, vibrant and insightful as ever. The doc begins with Morrison recalling how she learned ‘words have power’ from her grandfather, whose constant re-reading of the Bible during an era when it was illegal for African-Americans to be literate was a ‘revolutionary act’ that opened her eyes to prose’s capacity to move, enlighten and transform.” - Nick Schager, Variety. This inspiring portrait of the inspirational Nobel laureate is Recommended.