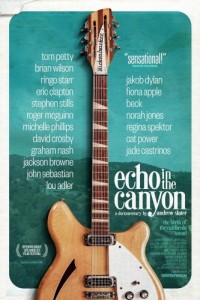 Echo In the Canyon

Jakob Dylan (yes, his father is famous)  takes us on a musical history tour of California’s Laurel Canyon in the late 1960s, a time when The Byrds, The Mamas and the Papas, Buffalo Springfield, Joni Mitchell, Judy Collins and the Brian Wilson were creating music that inspired then and still does today. Mr Dylan interviews such music giants as Tom Petty, Roger McGuinn, David Crosby, Jackson Brown, Stephen Stills, Michelle Phillips, Eric Clapton and Ringo Starr but he also gathers an impressive group of his contemporaries (Cat Power, Beck, Fiona Apple, Regina Spektor and Norah Jones) to play some of the music that inspired them. History rarely sounds this good!