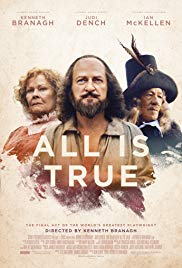 "Branagh’s most personal tribute to the Bard is surely his latest film, All Is True— a tender, intelligent imagining of the playwright in retirement. Restrained and moving, with a highly literate script by Ben Elton and a slew of fine performances from grandees and up-and-comers alike, the film pairs Branagh, as an amiably vulnerable, very human Bard, with Judi Dench as Anne Hathaway, in a drama about a titan returning to everyday domesticity after a lifetime in the artistic stratosphere."—Jonathan Romney, Screen International. An exceptional cast also includes Lydia Wilson and Ian McKellen.