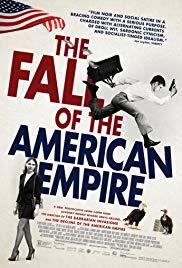 The Fall of the American Empire

Pierre-Paul is a thirty-something courier with a PHD in philosophy and a huge student debt. When Pierre-Paul's deliveries put him in the middle of a botched robbery, he has a new problem - how to safely spend his new, but illegal wealth. As with his earlier films, The Decline of the American Empire and Barbarian Invasions, writer/director Denis Arcand uses this humourous plot to expose a world where homelessness and food banks abound, intelligence and honesty are sneered at, and greed, selfishness and corporate malfeasance are rewarded. Oh, M Arcand, it's so good to see your sharply-barbed political humour back onscreen again. Rémy Girard (as usual) almost upstages a fine ensemble cast. Recommended. In French and English with subtitles.