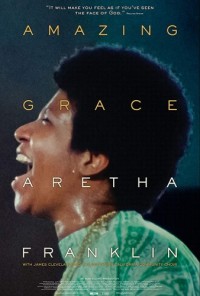 “Amazing Grace is a filmed record of the two nights, in January 1972, during which Aretha Franklin recorded the gospel performances that became the celebrated live double album Amazing Grace. It remains not only the best-selling gospel record of all time, but the best-selling album of Franklin’s 50-year career. She was then at the height of her stardom, with 20 albums and 11 number-one singles (all the iconic hits: Respect, Chain of Fools, Think, etc) under her belt, and she wanted to do a record that honored the formative gospel roots of her youth. Amazing Grace can stand as an essential filmed record of what is undoubtedly one of the greatest gospel performances you’ll ever see.”­—Owen Gleiberman, Variety. Amazing Grace is Most Highly Recommended and possibly the closest thing to a religious experience you may have in a cinema.