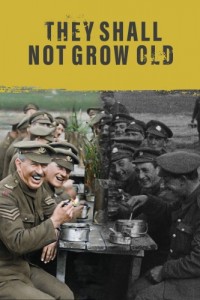 REVIEW: THEY SHALL NOT GROW OLD

They Shall Not Grow Old

“Peter Jackson has created a visually staggering thought experiment; an immersive deep-dive into what it was like for ordinary British soldiers on the western front. This he has done using state-of-the-art digital technology to restore flickery old black-and-white archive footage of the servicemen’s life in training and in the trenches. He has colourised it, sharpened it, and as well as using diaries and letters for narrative voiceover. The effect is electrifying. The soldiers are returned to an eerie, hyperreal kind of life in front of our eyes, like ghosts or figures summoned up in a séance. The faces are unforgettable...as an act of popular history, They Shall Not Grow Old is outstanding.”—Peter Bradshaw, The Guardian. Highly Recommended.