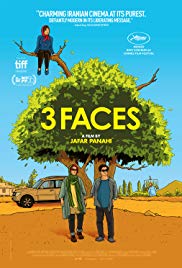 “Jafar Panahi was arrested in 2010 for allegedly making anti-Islamic propaganda and was sentenced to a 20-year ban from filmmaking. That hasn’t stopped him. His 3 Faces may be modest and low-key on the surface, but its surprises are worth preserving, its insights casually profound. At the heart of the story is a mystery: What happened to Marziyeh (Marziyeh Rezaei), a teenage girl and aspiring actress from a border town, who has suddenly gone missing? Before she vanished, Marziyeh sent an alarming self-shot suicide video to the famed actress Behnaz Jafari (playing herself). Jafahi was sufficiently rattled by the footage that she has now come to the girl’s village in search of answers, chauffeured by none other than the director Panahi himself. Much of this bracingly pleasurable movie is spent following Panahi and Jafari as they drop in on the villagers and make inquiries. They observe firsthand the environment-largely cut off from the outside world and ruled by small, superstitious minds—that undoubtedly gave rise to Marziyeh’s crisis.”— Justin Chang, LA Times