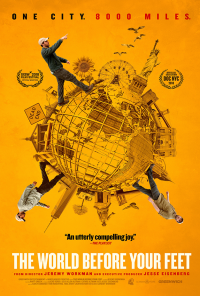 The World Before Your Feet

“The World Before Your Feet is a disarmingly charming documentary about Matt Green’s quixotic eight-year quest to walk 8,000 miles of streets, highways, park paths, piers and cemeteries in New York City. And oh, the people he meets and the things he sees. He’s a history buff, a nature lover, a cell-phone camera photographer and a writer with an eye for the poetic, creating accounts for his I’m Just Walkin blog of each day’s treks and the sights he sees...The 30-something Green, a civil engineer who gave up a desk job to start walking (he hiked across America, first) is curious, informed and learning every day of his life. The World Before Your Feet suggests an entirely new way of visiting, or living in, New York. As Green stops to take a picture of a 9/11 memorial mural or pauses to share a beer with the retired Caribbean islanders tending a community garden, you can’t help but think that this is the way to see New York, and that this guy should run for mayor.” —Roger Moore, Movie Nation. Recommended.