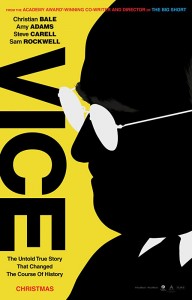 Christian Bale, in a fat suit and extensive make-up, stars as Vice-President Dick Cheney, along with Amy Adams as his wife Lynne, Steve Carell as Don Rumsfeld, and Sam Rockwell as the POTUS GW Bush, in this unsubtle film about unsubtle persons in American power politics. It’s hard to believe that the country could dip any lower than these arms-dealing good ole boys, but the current occupant of 1600 Pennsylvania Blvd has a way of making the turbulent 2000s seem like the good old days. To the joy of moviemakers, America just keeps shuffling up new houses of cards. Jokers are wild. Deal me in.