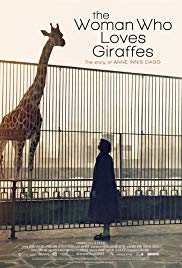 The Woman Who Loves Giraffes

The audience reaction nearly blew the roof off the place at our early December Sunday Secret Cinema screening. This doc tells the story of Anne Innis Dagg, who, in her early twenties, traveled to Africa where she followed her scientific passion studying giraffes in their natural habitat. As she literally wrote the book on giraffes she also encountered the career-crushing academic sexism of the time. Since that male-domination (apparently) continues in academia, Ms Dagg continues her decades-long commitment to helping other female academics work for change. Like Ann, this film is full of history, character, curiosity, adventurous spirit, and the infectious charm.