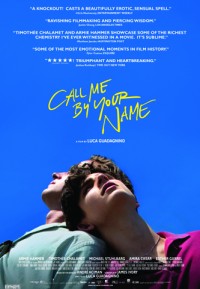 REVIEW: CALL ME BY YOUR NAME

Call Me by Your Name

This lush travelogue basks in the sun-drenched coast of Italy, where the Perlman family summers. It is a languid time of relaxed intellectual pursuits and of sexual awakening. The film has enjoyed near-universal acclaim, similar to this review from the Variety’s Peter Debruge: “Of all the ways in which Luca Guadagnino’s Call Me By Your Name advances the canon of gay cinema, none impresses more than the fact that it’s not necessarily a gay movie at all – at least, not in the sense of being limited to LGBT festivals and audiences. Rather, the I Am Love director’s ravishingly sensual new film, adapted from André Aciman’s equally vivid novel, is above all a story of first love – one that transcends the same-sex dynamic of its central couple, much as Moonlight has. Even as he beguiles us with mystery, director Guadagnino recreates Elio’s life-changing summer with such intensity that we might as well be experiencing it first-hand. It’s a rare gift that earns him a place in the pantheon alongside such masters of sensuality as Pedro Almodóvar and François Ozon, while putting Call Me By Your Name on par with the best of their work.”