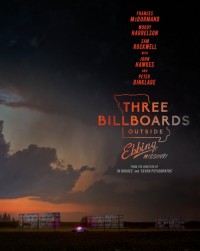 Winner of the Peoples’ Choice Award at TIFF 2017, Three Billboards..., is a smart, sassy and, at times, violently satirical take on the injustices and inequalities that exist in the heart of America. It is also a showcase for the considerable talents of Frances McDormand, Sam Rockwell, Woody Harrelson and the supporting cast. Fed up with the lack of results in the local police investigation into her daughter’s murder, Mildred Hayes (Ms McDormand) buys three billboards on the outskirts of town to advertise her displeasure and goad the sheriff into action. This unleashes an avalanche of angry reaction, protective inaction and increasingly outrageous actions by the citizens of Ebbing. “It's full of sharp dialogue and entertaining characters and fuelled by a wryly enlightened view of our world and how it can be at once cruel and caring. For a story built on such dark foundations, it's weirdly reassuring. It's also enormous fun.”—Time Out London. Most Highly Recommended.