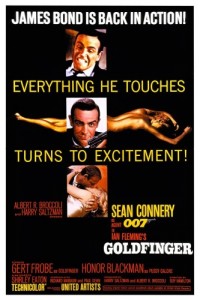 nov 30 “In a world where gold is power, one man wants it all: Auric Goldfinger. His dastardly plan involves financial ruin, calculated terror and countless deaths. Only one man can stop him: Bond, James Bond. To celebrate the longest running film franchise of all of time, Guelph Cult Cinema is proud to present the Sean Connery classic that elevated the spy genre from popcorn matinee movie to cultural phenomenon. A movie that is both of its time in style and ahead of it in thrills, Goldfinger gave audiences what many call the definitive James Bond formula. Grab your martinis at the bar and enjoy the adventures of the world’s greatest gentleman spy as he saves the world from certain doom in the big screen adaptation of Ian Fleming’s novel, Goldfinger.”—Scott Richardson