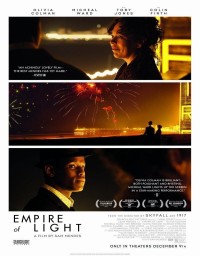 "Empire of Light recreates a coastal England town in the 1980s vividly realized with dampened boardwalks set under a sky permanently set to rain. There is, in this town, a grand theatre, the kind that survived the heyday of the big-screen film going, but a theatre that those of us sitting in the comfort of 2022 realize will soon be earmarked for closure.

"The film begins with Hilary's (Olivia Colman) return to the theatre after what is presumed to be an unspecified breakdown. At first, not much is known about her absence and why her coworkers, who are (mostly) caring and supportive, treat her with the quiet resolve of being around a souffle at risk of collapse. But there is more to Hilary's fragility than her illness. Hillary, a single middle-aged woman — at a time when being single and middle-aged came with its own baggage — watches as life seems to unfold without her. Her existence appears to rest solely on the inappropriate attention of her boss, a sleazy narcissist played with understated villainy by Colin Firth. But Hillary has renewed hope when a handsome new employee (Michael Ward) takes an interest in her." - Thom Ernst, Original Cin.

"Empire of Light is a sweet, heartfelt, humane movie, which doesn’t shy away from the brutality and the racism that was happening in the streets outside the cinema. - Peter Bradshaw, The Guardian