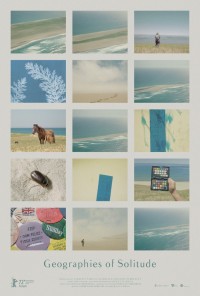 "Geographies of Solitude is an immersion into the rich ecosystem of Sable Island, guided by naturalist and environmentalist Zoe Lucas who has lived over 40 years on this remote sliver of land in the Northwest Atlantic Ocean. Shot on 16mm and created using a scope of innovative eco-friendly filmmaking techniques, this feature-length experimental documentary is a playful and reverent collaboration with the natural world. Zoe leads us among wild horses, seals and bugs, through peaks, valleys, roots, sands, weathers, seasons and stars. The intangible is evoked with hidden sounds and vanishing light. Much like a field book, the film tracks its protagonist's labour to collect, clean and document marine litter that persistently washes up on the island shores." - Films We Like.

"The Canadian documentary Geographies of Solitude won three awards at the last Berlin Film Festival, as well as best Canadian film at Hot Docs and prizes at several other festivals. It marks an auspicious feature debut from filmmaker Jaqueline Mills. Unquestionably, it’s a beautiful film, shot in 16 mm, with grainy, almost tactile, images and sounds. There is an inky sky, strewn with stars; the silhouette of a horse, mane blowing in the wind, water droplets and scampering bugs, the rustling of the wind and the rumble of waves. It weaves together themes of women’s life choices, our fraught relationship to nature, the art of archiving and the power of awe." - Liam Lacey, Original Cin.