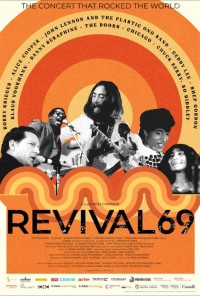 Revival69: The Concert That Rocked The World

Revival69: The Concert that Rocked the World is a documentary with a back story almost as impressive as what ends up on screen. Even more incredible, it’s a story that was very nearly lost to the passing of time until a Toronto director stepped in.

In autumn 1969, following what had been a smash concert that spring, 22-year-old Toronto promoter John Brower hoped to stage another live music shindig. Brower’s vision was to unite the living pioneers of rock and roll, booking Chuck Berry, Little Richard, Jerry Lee Lewis, Bo Diddley, and Gene Vincent to perform.

Added to that, Brower booked two fledgling acts: a shock-rock combo from Detroit called the Alice Cooper Band, and a jazz-rock outfit from Illinois called Chicago. Despite the strong lineup in an era virtually defined by irreverent rock — Woodstock had just happened that summer — ticket sales were sluggish. Really sluggish.

Promoter Brower needed a fix, and fast. He booked The Doors, controversial at the time owing to an infamous incident at a Miami concert earlier that year, and he leaned on bikers to underwrite the show. The stakes were impossibly high, but Toronto concertgoers still hadn’t got the proverbial memo, perhaps daunted by the then-steep six-dollar ticket price.

On a lark, Brower asked John Lennon to join the event.  Unbeknownst to the promoter, Lennon was at a crossroads, wanting to escape the Beatles and explore other musical avenues but unsure of the right direction.

The Toronto event seemed like a solid distraction, and Lennon’s rock and roll heroes would all be there. With Yoko Ono and the Plastic Ono Band featuring Eric Clapton (!) in tow, Lennon headed to Toronto. The subsequent show, dubbed the Toronto Rock ‘n’ Roll Revival and held September 13, 1969, at Varsity Stadium, was a game-changer on multiple fronts.

The Toronto Rock ‘n’ Roll Revival was once cited by Rolling Stone magazine as the second most historic concert of all time, behind just Woodstock, though proof of that remains elusive online. (Both director Chapman and former rock critic and concert attendee Ritchie Yorke, speaking with Toronto author and historian Nicholas Jennings, say the designation is true. Ditto Toronto Star film writer and former rock writer Peter Howell, who has a copy of the issue somewhere in his files)." - Kim Hughes, Original Cin.