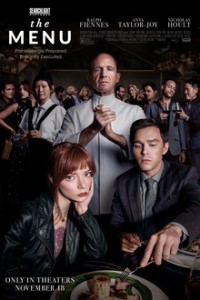 "The Menu is billed as a horror-comedy, which it is, but it isn't. There are scenes of violence (not excessive), scenes of trepidation, and at least one scene that indeed left me horrified—but don't let the horror label dissuade you from seeing the film.

The Menu is satire with a distinct Agatha Christie-ish premise. The film is about a group of indecently wealthy clients who bring their equally indecent appetites with them (okay, one food reference. I promise to do better) to dine at celebrity Chef Julian Slowik (Ralph Fiennes)’s exclusive island restaurant. The clients include an overly zealous status seeker (Nicholas Hoult at his nastiest) and his hard-to-impress date (Anya Taylor-Joy at her best). There is an older couple (Judith Light and Reed Birney) who seem barely able to tolerate each other's company, an actor (John Leguizamo) whose star is fading, and his long-time assistant (Aimee Carrero) who just handed in her resignation. There is a trio of self-centered playboys, an insufferably arrogant food critic (Janet McTeer) with her sycophantic magazine editor (Paul Adelstein). Slowik is not just your atypical volatile, ego-maniacal eccentric chef. He's a chef who considers his meals to be works of art—and not all servings are edible. Slowik's bizarre reign goes unchallenged. He runs the kitchen with military precision.

The Menu quietly channels Luis Buñuel's social satire from 1962, The Exterminating Angel. In Bunuel's film, diners find themselves going from guest to prisoner. The Menu is not a remake of Bunuel's film, only a reminder of how effective of a tool satire can be...The Menu is the most entertaining ensemble film since Knives Out, and the most engaging horror-satire since Get Out. But no matter what comparisons and assumptions are made, The Menu will not be the movie you expect."       - Thom Ernst, Original Cin.