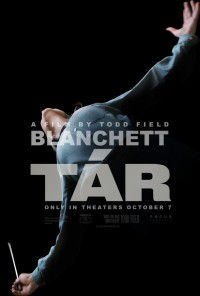 "The complicated character at the centre of the film is Lydia Tár (Cate Blanchett), a hugely accomplished artist and intellectual at the pinnacle her career. She’s the conductor of a major Berlin symphony who specializes in the works of Mahler, a member of the EGOT club (Emmy, Grammy, Oscar, Tony), and a published author about to release a new book.

"Highly educated, a renowned pianist, a protégée of Leonard Bernstein and on and on, she is also, of course, a successful woman in a world still dominated by men. She lives a trans-Atlantic life. In New York, among other things, she co-administers a fund supporting aspiring women conductors. She also teaches at Juilliard. Her main digs are in Berlin, where she lives in a stunning modern flat with her wife Sharon Goodnow (superb German actress Nina Hoss), who is also first violinist in the orchestra, and their daughter Petra (Mile Bogojevic).

"Tár is getting ready to conduct Symphony No. 5, the final in her recordings of Mahler’s symphonies. Tár has a lot of power and influence, and the film centres on how her life unravels as she handles — and mishandles — a series of personal and professional relationships that constantly veer into muddy territory. Tár is strong-willed, educated, driven, focused, thoughtful, but also vain and self-interested, sometimes dishonest, and there is a cold, vindictive streak there.

"As the film goes on, we get the sense that Tár likes the power she has, but is sometimes oblivious to her own actions, or seems compelled to do things that puzzle her. Ultimately when accusations are made against her, and social media gets into the picture with its mob affect, we get that there aren’t a lot of people lining up to defend her.

"Blanchett won the Best Actress award at the Venice Film Festival, where the film had its world premiere, and it’s easy to understand why. The performance is a masterclass in subtlety and nuance. Blanchett is a formidably talented actor who throws herself into her roles with commitment." - Karen Gordon, Original Cin.

"An engrossing and stylistically exacting work of cinema, Tár teases our political (as in: identity) sentiments with such a ferocious artistic confidence that you will leave the theatre with questions, arguments, demands – but most of all a supremely fulfilling sense of satisfaction. Here is a film that not only starts a debate but almost ends it, too." - Barry Hertz, Globe and Mail.

"The movie is breathtaking — in its drama, its high-crafted innovation, its vision. It’s a ruthless but intimate tale of art, lust, obsession, and power." - Owen Gleiberman, Variety.