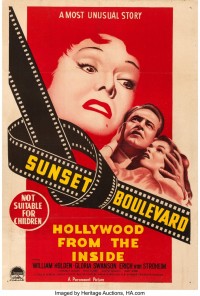 "Billy Wilder's Sunset Boulevard is the portrait of a forgotten silent star, living in exile in her grotesque mansion, screening her old films, dreaming of a comeback. But it's also a love story, and the love keeps it from becoming simply a waxworks or a freak show. Gloria Swanson gives her greatest performance as the silent star Norma Desmond, with her grasping talons, her theatrical mannerisms, her grandiose delusions. William Holden tactfully inhabits the tricky role of the writer half her age, who allows himself to be kept by her. But the performance that holds the film together, that gives it emotional resonance and makes it real in spite of its gothic flamboyance, is by Erich von Stroheim, as Norma's faithful butler Max.

"Sunset Boulevard remains the best drama ever made about the movies because it sees through the illusions, even if Norma doesn't. When the silent star first greets the penniless writer inside her mansion, they have a classic exchange. 'You used to be big,' he says. Norma responds with the great line, 'I am big. It's the pictures that got small.' Hardly anyone remembers Joe's next line: 'I knew there was something wrong with them.'" - Roger Ebert

This film is a true classic that stands the test of time.