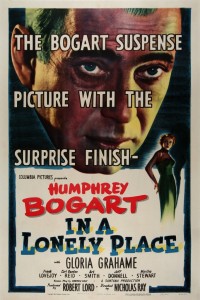 In a Lonely Place

Humphrey Bogart produced this adaptation of Dorothy Hughes' novel and stars as Dixon Steele, a struggling screenwriter (is there any other kind?) questioned about the murder of a woman. They were seen together the night before at a local bar. Dixon's neighbour, Laurel Gray (Gloria Grahame) already somewhat smitten with Steele, offers him an alibi, and their relationship begins, until doubt seeps into every aspect of their lives.

"In a Lonely Place has been described by the critic Kim Morgan as 'one of the most heartbreaking love stories ever committed to film, and love is indeed what it's really about. It has the look, feel and trappings of a film noir, and a murder takes place in it, but it is really about the dark places in a man's soul and a woman who thinks she can heal them."
- Roger Ebert. Highly Recommended.