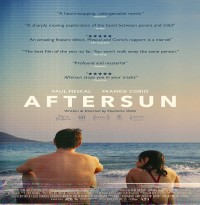 "Brimming with warmth and the ache of cherished memory, Scottish writer-director Charlotte Wells’ feature debut is a quiet revelation. Recalling a father–daughter journey to a Turkish seaside resort some 20 years after the fact, Aftersun employs the gentlest touch yet leaves an indelible mark.

"Though Calum (Paul Mescal) is 30 and his daughter Sophie (Frankie Corio) just 11, they occasionally get mistaken for siblings. This is because of Calum’s baby face, but also his playful attitude: the pair really get along. Having split from Sophie’s mum, and having left their Edinburgh home for England, Calum knows how precious their time together is. Whether hanging by the pool, taking excursions on the sea, or shopping for carpets, Calum encourages Sophie’s abundant curiosity… until he doesn’t." - Ravi Srinivasan, TIFF 2022.

From the indie American distribution house, A24, this film has received some of the highest praises of any film this year.

Here's but a sample:

"Aftersun flows like a fondly remembered memory that’s been replayed endlessly, as if trying to find an important detail that might explain what happened. The easy pace of Wells’s direction brings out the best in her central performers, and the chemistry between Mescal and Corio plays out effortlessly. The light moments between them are warm and the darker ones linger heavily." - Anna Bogutskaya, Time Out

"That a director can summon such emotional maturity paired with grand narrative originality in her first outing, particularly working from a deeply personal standpoint, astounds. Wells, a forward-thinking artist, invites into a vortex of feelings and sensations that fully exploits the language of cinema for its gorgeously humanistic pursuit."
- The Wrap, Carlos Aguilar

"With remarkable confidence, [Wells] just lets her movie unspool naturally, like a haunting and deceptively simple short story. The details accumulate; the images reverberate; the unshowy gentleness of the central relationship inexorably deepens in importance." - Peter Bradshaw, The Guardian.