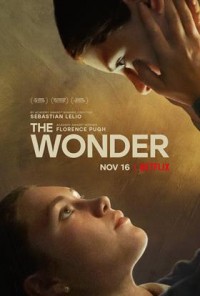 Florence Pugh burst onto the international film scene with her debut film, Lady Macbeth, scripted by Alice Birch, who co-wrote this adaptation of Emma Donoghue's novel with the author.

"Lib Wright (Florence Pugh), a veteran of Florence Nightingale’s Crimean campaign, arrives in the Irish Midlands hired for an unusual task: to observe an 11-year-old girl named Anna O’Donnell (Kíla Lord Cassidy), who has reportedly not eaten a morsel for four months. As religious tourists descend on the village, the town council wants answers and so hires Lib, a medical professional, along with a nun, to watch the child and determine the root cause of the phenomenon. Disturbed by the pious fervour hampering her investigation, and pestered for inside information by William Byrne (Tom Burke), an ambitious journalist for a London paper, Lib realizes that extraordinary measures must be taken to save Anna from an increasingly volatile situation... Rich in substance and character exploration, while driven by a commanding performance from Pugh, The Wonder is a story of science versus faith that explores whether one woman can heal by utilizing both."