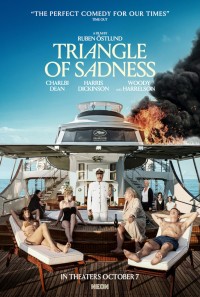 Ruben Ostlund has been winning awards and audiences since Force Majeure (2014) blasted its way into the international film scene. His 2017 film The Square (starring Elizabeth Moss and Claes Bang) won the Cannes Palme d'Or, and continued to challenge, confront and entertain audiences. His latest film, Triangle of Sadness, takes us on board an exclusive luxury liner helmed by a Marxist-spouting lush played by Woody Harrelson and filled with super models, social influencers and filthy rich oligarchs. It also won the Cannes Palme d'Or, 2022. When the ship encounters rough waters, Ostlund cranks things into overdrive, spewing extreme social satire in all directions.

"It’s a stellar film that hits a rare sweet spot as both mainstream, accessible entertainment, and also an undeniably incisive piece of cultural commentary. And best of all, it will keep you on your toes until the sensational final moment of its breezy drift." - Tomris Laffly, The A.V. Club.