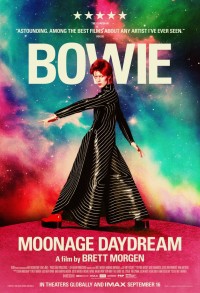 "David Bowie had a multitude of personas as a musician, painter, actor, and world traveller. This documentary portrait, told in his own words from decades of interviews, is as bold and visually inventive as he was. Coming six years after his death, the film...celebrates the immortality of his art, drawing upon an astonishing depth of rare footage including live performances of quintessential songs such as “Moonage Daydream,” “Space Oddity,” “Sound and Vision,” “Heroes,” and more." Thom Power, TIFF 2022

"An organized riot of images and sounds, Moonage Daydream is perhaps the only way a documentary biographer could approach the story of David Bowie. Brett Morgen (“Crossfire Hurricane”) has made his true masterpiece, the perfect film to celebrate a multifaceted life of aesthetic excess." - Roger Moore, Movie Nation

"The beauty of Brett Morgen’s velvet-and-facepaint collage Moonage Daydream is that it doesn’t try to be definitive. Instead, it’s a glide through Bowie’s career, hardly complete yet somehow capturing both the spirit and the genius of this most enigmatic and alluring artist." - Stephanie Zacharek, Time.