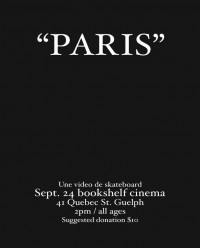 "The robot boys in partnership with The Bookshelf Cinema are pleased to present "PARIS" une video de skateboard.

"A time capsule of Guelph skateboarding circa 2010. Named after his cat "PARIS" the title is adaptable to the architectural Cityscape provided by Guelph, Ontario.

"Masterfully filmed and edited by Christopher Veilleux; this independent skateboarding film will provide an unforgettable visual experience. Featuring video parts from chris Vega, Lord Gord and Drew Steadman, this retrospective is a remarkable piece of history to add to the Guelph skateboarding scene."

Admission is Free, but with a suggested donation of $10.00.