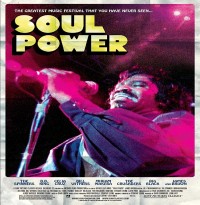 This is a free screening presented in conjunction with the U of Guelph conference, Curating the Change: The Work that Music Festivals Do in the World.

Soul Power is a documentary film about the Zaire 74 soul music festival in Kinshasa, which accompanied the Rumble in the Jungle heavyweight boxing championship match between Muhammad Ali and George Foreman in October 1974.

With a prerecorded introduction by George Lipsitz, Professor of Black Studies and Sociology at the University of California, Santa Barbara. He has authored (among other books) How Racism Takes Place, The Possessive Investment in Whiteness, Time Passages, Dangerous Crossroads, Footsteps in the Dark and Midnight at the Barrelhouse. He serves as editor of the Insubordinate Spaces series at Temple University Press, as editor of the comparative and relational ethnic studies journal Kalfou, and as co-editor of the American Crossroads series at the University of California Press. Lipsitz serves board chair for the African American Policy Forum and for the Woodstock Institute. The American Studies Association awarded him the Angela Y. Davis Prize for Public Scholarship in 2013 and the Bode-Pearson Prize for Career Distinction in 2016.