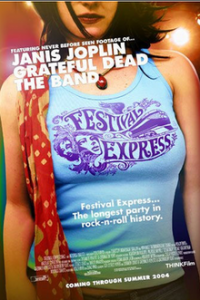 This is a free screening presented in conjunction with the U of Guelph conference, Curating the Change: The Work that Music Festivals Do in the World.

The filmed account of a large Canadian rock festival train tour boasting major acts. In the summer of 1970, a chartered train crossed Canada carrying some of the world's greatest rock bands. The Grateful Dead, Janis Joplin, The Band, Buddy Guy, and others lived (and partied) together for five days, stopping in major cities along the way to play live concerts.

With a prerecorded introduction by Clarke Mackey, Emeritus Professor in the Department of Film and Media at Queen's University where he taught for 30 years. A media maker, writer, teacher, and cultural activist living in Kingston, Ontario, he has worked as a director, cinematographer, editor, producer or writer on over 50 film, television, and new media projects. Clarke Mackey was one of four cinematographers on the 1970 concert tour that became Festival Express, released 34 years after the original event. His latest project, a six-episode fiction podcast called The Makers and Shakers Society, is coming out in September.