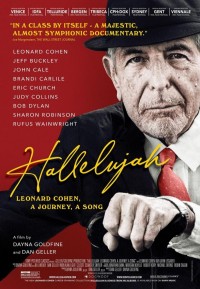 "The profound loss of Leonard Cohen as both artist and exalted human being is acutely felt in the documentary Hallelujah: Leonard Cohen, A Journey, A Song which seeks to understand Cohen’s life — more specifically, his search for the meaning of life — through his best known, most covered song, the iconic and heart-rending "Hallelujah."

"An absolute treasure trove of trivia, the film was approved for production by Cohen before his death in 2016 at age 82. It includes never-before-seen archival materials from the sprawling Cohen Trust, including journals showing the ever-changing lyrics of “Hallelujah” plus photographs, performance footage, and rare audio recordings and interviews notably with onetime journalist-cum-Governor General Adrienne Clarkson and Rolling Stone writer Larry “Ratso” Sloman. There is also ample talking-head commentary from admiring musicians. Filmmakers Dan Geller and Dayna Goldfine, inspired by Alan Light’s book The Holy or the Broken: Leonard Cohen, Jeff Buckley & the Unlikely Ascent of Hallelujah, leave almost no stone unturned in their quest to examine the enduring appeal of "Hallelujah" across the years and mediums...an otherwise glorious, meticulous, and heartfelt homage to a singular artist who left the world immeasurably better than he found it."
- Kim Hughes, Original Cin