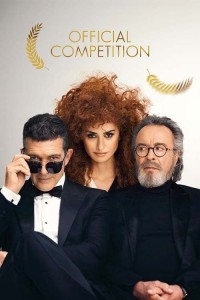 "Having surveyed his legacy and finding it lacking in prestige, an octogenarian millionaire pharmaceutical tycoon (José Luis Gómez) decides to finance a great work of cinema. He purchases the rights to a Nobel Prize–winning novel about sibling rivalry and entrusts the property to enigmatic auteur Lola Cuevas (Penélope Cruz). A visionary conceptualist with a penchant for offscreen theatrics and micromanagement, Lola casts as her embattled co-leads a pair of veteran thespians who couldn’t be less alike: Iván Torres (Oscar Martínez) is a revered educator and legend of the stage much concerned with ethics and artistry, while Félix Rivero (Antonio Banderas) is a glamorous global star known mostly for brainless, bombastic entertainments." - TIFF 2021.

Great performances from the three lead actors make this an hilarious satire of all things European cinema, art and show biz. In Spanish with subtitles.