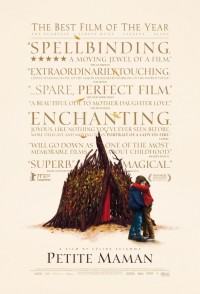 "There is magic in French writer/director Céline Sciamma’s beautiful new film Petite Maman. Running just 72 minutes, this spare and gentle little film has an emotional core that feels true and authentic. Eight-year-old Nelly (Joséphine Sanz) has just lost her beloved maternal grandmother. Her mother (Nina Meurisse) and father (Stéphane Varupenne) load her into the car and head up to the country house where her mom was raised, to clean out Grand-mére’s house.

"The grief might be too much for her mother, who goes back to their home in town without explaining or saying goodbye to Nelly. Nelly, who is a thoughtful and much-loved, seems to take it in stride.

"Grand-Mére’s house faces a wild area, a natural forest, and so while her father packs up the house, Nelly goes exploring. That’s where she runs into a little girl, her age, and who could be her twin, named Marion, (Gabrielle Sanz).
As they’re getting to know each other, it starts to rain. The two girls run to Marion’s house.  For Nelly, it’s immediately odd: The house is identical to her grandmother’s. And Marion’s mother walks with a limp, as her grandmother did, and has a cane that looks like the one her grandmother used. There is magic afoot here, but Petite Maman isn’t a supernatural movie. Sciamma is using this to get at something more wistful and emotionally resonant, about the connection between generations - in particular here the connection of mothers and daughters going back generations.
"As in her previous film Portrait of a Lady on Fire, Sciamma has taken a less conventional  story route.  She’s once again focusing on characters going through an emotional experience of sorts, a shift. As in Portrait the pace in Petite Maman is unhurried. There are quiet spaces in the film where it feels like not much is happening. And yet, of course, it’s all leading somewhere. That quiet extends to the soundtrack. Other than one notable scene where music dominates, the soundtrack is provided by the natural world. The crackle of leaves underfoot, the sounds of the girls eating meals or making crepes. It sets a calm, peaceful, even happy tone.  This all adds to a contemplativeness to what we’re seeing. In some ways, the film is made with such a light touch that it’s a miracle of storytelling that it holds together, and contains such deep emotions.
"Petite Maman is an exercise in simplicity. It really shows how masterful a story teller and a filmmaker Sciamma is.  It also makes the case for a different kind of story telling that doesn’t manipulate or sensationalize, to achieve its aims.
The film is so spare, and has such a gentle touch, and treats its characters with affection and tenderness.  It seems as quiet as a whisper, and yet, at the end, we’re left with something profound and beautiful." - Karen Gordon, Original Cin.
My home screening was grossly disappointing, this film needs to be watched in the cinema. In French with subtitles.