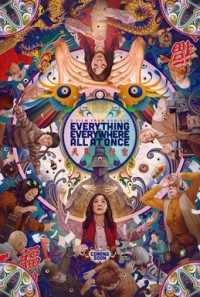 Everything Everywhere All at Once - Extended Cut

The new extended cut version features an intro by the directors and eight minutes of outtakes.

"Without question, Everything Everywhere All at Once is a remarkable piece of work, one of the most original and creative films of the past couple of years. It’s so much its own thing that it’s hard to imagine how it was ever put together — how it was conceived, written, filmed and edited. Directors Dan Kwan and Daniel Scheinert (known collectively as Daniels) had nothing to fall back on, no genre conventions, no established patterns. They made this one up on their own.

"A movie like this is a full meal, and after two hours and 12 minutes, viewers may start to feel as force-fed as a goose on a French farm. Everything Everywhere All at Once never slows down and never wastes the audience’s time, and yet it’s safe to say that no one will walk out of the theater wishing it were 10 minutes longer.

"It stars Michelle Yeoh as Evelyn, a harried middle-aged woman trying to run a struggling laundry business. Her tax returns are being audited, and she feels that she’s not getting enough help from her sweet-natured husband (Ke Huy Quan). She tends to take her frustrations out on her lesbian daughter, Joy (Stephanie Hsu), whom she can’t stop criticizing for everything, including her weight.

"In the early minutes, Everything Everywhere All at Once could be a Chinese film. It’s almost entirely subtitled, and it has the frenetic pace of a Chinese comedy. As it goes on, it never quite loses that feeling, but it broadens. On the elevator, heading to the IRS office, Evelyn is told by a messenger from another universe that she is the only person with the power to save all the millions of universes from chaos and destruction.

"This notion of a multiverse is getting a lot of traction in recent movies, but Everything Everywhere All at Once does it more and does it better — way better than the Marvel movies.

"Yeoh is superb, totally up for the action while understanding every nuance of the multiple Evelyns, in all their pettiness and potential grandeur. (She has a drawn-out brawl with Jamie Lee Curtis, as an IRS agent from another universe, that deserves to be anthologized.)" - Mick La Salle, San Francisco Chronicle. In English, Cantonese and Mandarin with subtitles.