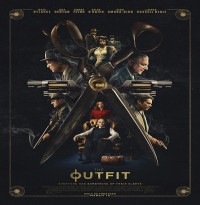 "The Outfit is not, strictly speaking, a movie about magic. Yet the gangland thriller pulls off a number of nifty tricks, with first-time director Graham Moore playing his hand with equal parts sleight and might.

"Featuring little pyrotechnics and lots of handsome dialogue, The Outfit plays like a zippy adaptation of an acclaimed stage play – yet it is in fact an entirely original-to-the-screen work. And starring the wonderful Mark Rylance, The Outfit arrives as a late-career star vehicle of sorts for the oft-supporting player – yet the British actor is matched scene for scene by his various, lesser-known co-stars.

"Each of these surprises, magic acts in miniature, adds up to a wry and satisfying caper that might just make The Outfit the most pleasant distraction of this young and cursed year...Set in 1956 Chicago, The Outfit opens in the small workshop and storefront of Leonard (Rylance), a master suit “cutter” – not a tailor, as he reminds everyone – who uses the same skills he learned on London’s Savile Row to now dress mobsters. Leonard is a quiet man who wants no trouble, perfectly content with plying his trade while gangsters enter his space to make their weekly cash drops.

"There is an old-fashioned sensibility to The Outfit that is both reassuring and refreshing, like taking a sip of the coldest water from the comfort of Leonard’s most weathered leather armchair. Initially, Leonard’s shop seems too much of an itchy, claustrophobic setting for an entire film – yet as more rogue elements walk through its doors, and more bodies pile up in its corners, the space becomes a welcoming home for entertaining deviancy." - Barry Hertz, Globe and Mail