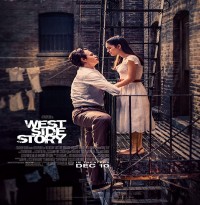 Steven Spielberg's reimagining of the classic American musical, itself a modernized urban version of Romeo and Juliet, (with screenplay by Tony Kushner) is nominated for seven Oscars, including Best Picture. What else can be said? "You're a Jet all the way, from your first cigarette to your last dying day."

"This is a West Side Story for both the past and present, as pleasing as the best movie musicals used to be, and as relevant as today’s headlines. It makes you feel like you are actually on the turbulent streets of New York’s west side, not a sound  stage." - Rex Reed, Observer.