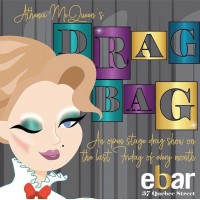 Athena McQueen’s DRAG BAG - An open stage drag show the last Friday of every month at The eBar.

Your feature entertainers for Drag Bar #6 :

Hamilton's cutest and fiercest drag couple @kingfreddiekahlo and @kikidebeauvoir! New start time is 11pm / PWYC. Drag Bag is an open stage drag show at the eBar where anyone in the community can sign up to perform.

Freddie Kahlo hit the Hamilton drag scened only a short 10 months ago. In that time he has hit the stage at local open stages and competitions had the pleasure of doing a few shows in Hamilton, Toronto and Winnipeg and the honour of opening for Kim Chi. Combining his love of special effects makeup, live performance and general frivolity, drag was the perfect outlet for Freddie. His drag is part camp, part filth, and almost always naked. he loves to blur the lines of gender and his motto is " when in doubt, add more glitter."

Kiki de Beauvoir has only been doing drag for 9 months in front of other people, but has been performing and playing in her living room for far longer. She grew up performing in musical theatre but was often passed over for roles because she was "too fat to play the skinny girls and too skinny to play the ft girls" but in drag, Nobody cares! Her penchant for neon wigs and conceptual numbers has landed her an opening spot for Detox in March, and if you're lucky you might even get to hear her sing live one day!

Standing room only - but seating is available for folks who require it.