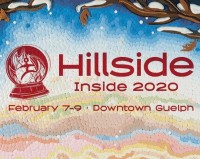 Join us for the first ever Hillside show at the fabulous eBar in the heart of downtown Guelph for one heck of a Saturday night (late).
CLICK HERE FOR EVENTBRITE TICKETS 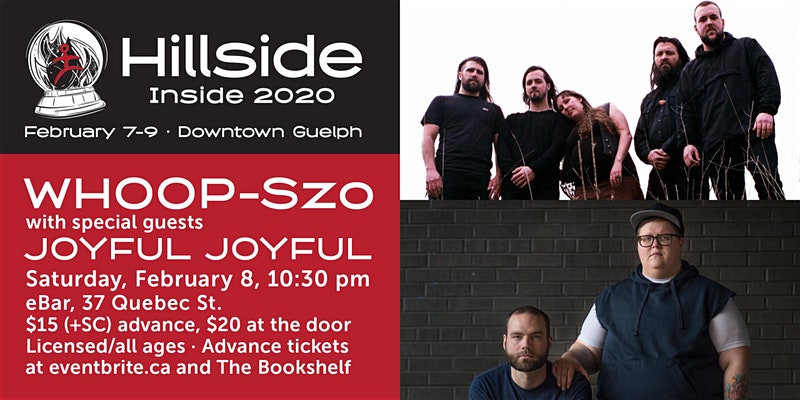 This is a General Admission Licensed/All Ages concert.

Renowned for their cross-genre exp erimentalism, unabashedly unique, WHOOP-Szo is a wild fusion of folk, metal, pop, grunge, and evenclassical musical stylings. Though radically diverse in tone, WHOOP-Szo has crafted their many sounds well, and are able to create immersive musical tapestries that evoke deep emotions while conveying troubling stories of civil unrest via layered harmonies, churning guitar, gritty synth, and a whole psychedelic plethora of other noise.

Music aside, WHOOP-Szo is well known for the boundaries that they have bridged between social work, activism, and music making, not only in their hometown of London, Ontario, but also in various communities across Turtle Island. As a band fronted by an indigenous artist, album and song themes often focus on issues like colonization,language, self-determination, and appropriation. Outreach feats include the creation of an Inuit Youth silkscreen apprenticeship program in Salluit, QC and workshops on Solidarity Through Art in Kingsclear First Nation, NB amongst others.

Opening the evening at will be the wonderful Joyful Joyful - a Peterborough/Toronto-based duo whose strange and beautiful soundscapes have been quietly attracting notice since they began performing four years ago. Drawing on traditional, sacred, and experimental music, Joyful Joyful doesn’t sound like anything else. Their performances are unsettling, humane, and hopeful. A thicket of cables and effects transforms a single, visceral voice into a shimmering and otherworldly chorus, making Joyful Joyful’s dense drone-hymns at once sorrowful, soaring, and deeply moving.