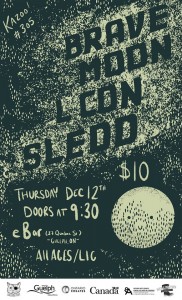 Brave Moon is the project of Guelph’s Alanna Gurr and Erin Tusa, and one of our city’s newest gems. Gurr and Tusa’s ethereal harmonies are the perfect complement to the minimalist electro-pop instrumentals, coming together to make music that will transport you to a marvelous dreamscape. You’ll want to sway and dance while this duo puts their musical spell on you. Their first ever 5 song E.P. will be self-released this December and they can't wait to share it with you.

L CON is the solo project of songwriter and sonic adventurer Lisa Conway. Lisa has collaborated with filmmakers, dancers, and performance artists, and completed creative residencies from New Brunswick, Canada, to Aubagne, France. An alumni of the Canadian Film Centre’s Slaight Music Residency, and one of two Canadians selected to be part of the renowned Red Bull Music Academy 2018 in Berlin, her work both in live performance and in the studio has garnered critical acclaim, drawing comparisons to Beth Gibbons, Laurie Anderson, PJ Harvey, and Bjork. Her new EP "Whatever" was released in October 2019.

SLEDD is the Electronic Dance Music project of Evan Gordon. His new record MAXIMUM ICE is a twisted version of top 40 pop and techno music, a soundtrack for the end times. SLEDD’s live show incorporates digital animation and synchronized lights to bring a stadium-size production to any small room.
Evan Gordon is a Guelph-based musician, producer and media artist. He has toured extensively with the groups ISLANDS and THE MAGIC, provided soundtracks for web series and short films, produced and mixed records locally and internationally and produced animated videos for himself and other artists.

The eBar (37 Quebec St, Guelph)
All Ages / LIC - Doors 9:30pm - $10
Unfortunately eBar is not a physically accessible venue (at this time: there will be a ramp to the eBar coming this January)

Thanks to: Ontario Arts Council, Department of Canadian Heritage, Ontario Creates, Wellington Brewery, and the City of Guelph.