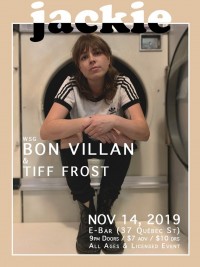 JACKIE: What started out as a writing project with Canadian JUNO award winning producer Hawksley Workman has now turned into a three piece rock band based out of the city of Toronto. Come see what you're missing...

BON VILLAN is a Toronto-based indie electronic trio that draws inspiration for their modern sound from artists like Sir Sly, Big Data, San Holo and Bob Moses. They made waves in 2018 by getting their first single “Outta Cash” on Spotify editorial playlists (New Music Friday Canada, New Music Now, It’s a Bop), playing across Canada on college radio and opening for acts like MONOWHALES and FXRRXST. They kept momentum, releasing their first music video/second single “When I Came Up”. The video broke 100k views on Facebook in two weeks while the single spun on local commercial radio stations. Their second music video/single “All The Way” topped that by getting 140k views on Facebook in a week and also saw love from commercial radio stations.