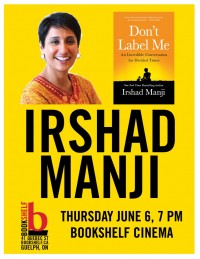 Don't Label Me, is a must read for anyone interested in getting beyond themselves! She is an amazing speaker and thought provoking political commentator.

Join us in the Bookshelf Cinema for a thought-provoking evening with Canadian journalist Irshad Manji as she reads from and discusses her newest book, Don't Label Me: An Incredible Conversation for Divided Times.

Don't Label Me explores how divisive matters of faith and freedom have created conflict worldwide, and discusses ways that we can move past discompassionate, dangerous thinking.

She will be in conversation with Barb Minett, with audience Q&A and book signing to follow. All are welcome!

About the book from the Publisher, St. Martin's Press:

A unique conversation about diversity, bigotry, and our common humanity, by the New York Times bestselling author, Oprah "Chutzpah" award-winner, and founder of the Moral Courage Project

In these United States, discord has hit emergency levels. Civility isn't the reason to repair our caustic chasms. Diversity is.

Don't Label Me shows that America's founding genius is diversity of thought. Which is why social justice activists won't win by labeling those who disagree with them. At a time when minorities are fast becoming the majority, a truly new America requires a new way to tribe out.

Enter Irshad Manji and her dog, Lily. Raised to believe that dogs are evil, Manji overcame her fear of the "other" to adopt Lily. She got more than she bargained for. Defying her labels as an old, blind dog, Lily engages Manji in a taboo-busting conversation about identity, power, and politics. They're feisty. They're funny. And in working through their challenges to one another, they reveal how to open the hearts of opponents for the sake of enduring progress. Readers who crave concrete tipswill be delighted.

Studded with insights from epigenetics and epistemology, layered with the lessons of Bruce Lee, Ben Franklin, and Audre Lorde, punctuated with stories about Manji's own experiences as a refugee from Africa, a Muslim immigrant to the U.S., and a professor of moral courage, Don't Label Me makes diversity great again.

"Charming and disarming, a story like this heals the divides that threaten to destroy America. Don't Label Me speaks for all of us who are more than the boxes that others put us into." - Marianne Williamson

Praise for Don't Label Me from St. Martin's Press:

"Don't Label Me should be labeled as genius. It's an amazing book. Right now, I'd like to say something biting and controversial but I'm way too scared of the backlash it could         create. That's why we need this book. Because nobody should be afraid to speak their mind, not even stupid people like me." - Chris Rock

“Why do diversity initiatives so often fail or backfire? Because we’ve been doing diversity wrong. Irshad Manji shows us a different way to think about identity; one that is humble, loving, humane, and therefore likely to work for many more people. In a time of rising national polarization and distrust, Don’t Label Me is among the most important books for Americans to read now." - Jonathan Haidt, New York University Stern School of Business, co-author of The Coddling of the American Mind

“When I publicly challenged Donald Trump to read the U.S. Constitution, it was in part because of the moral courage that Irshad Manji inspired in me. With this book, she takes boldness to another level. After heeding Irshad's call to examine my own prejudices about Trump voters, I have a new understanding of bravery, and of humanity.” - Gold Star father Khizr Khan

“Don’t let the format fool you. Cast as a dialogue with her dog Lily, Manji’s book is a surprising, challenging, and deeply original approach to confronting our divided times, arguing for the moral courage to confront not only people across the political divide, but our own tribal preconceptions and prejudices as well.” - Charles J. Sykes, author of How the Right Lost Its Mind

“Charming and disarming, a story like this heals the divides that threaten to destroy America. Don’t Label Me speaks for all of us who are more than the boxes that others put us into.” - Marianne Williamson

"Manji ponders deeply divisive subjects such as Black Lives Matter and homophobia...in the hope that society can evolve to bridge its divides and abandon its labels." - Booklist

"Profound and nuanced...[A] jubilantly intelligent and quintessentially human and optimistic book, one that is fundamentally important in a dangerously polarized and divided time." - The Toronto Star

Irshad Manji is founder of the award-winning Moral Courage Project at the University of Southern California and the New York Timesbestselling author ofThe Trouble With Islam Today, translated into more than thirty languages and later adapted into the Emmy-nominated PBS film Faith Without Fear. Oprah Winfrey selected her as the first winner of the "Chutzpah" prize for boldness. Manji has lived and taught in Toronto, Vancouver, New York, and Los Angeles. She and her wife reside in Hawaii with their rescue dogs.