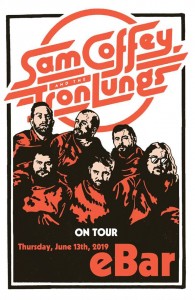 These amazing dudes killed it at #RFE18 and Riverfest Elora is extremely happy to be hosting them at The eBar as a part of the ongoing Road to Riverfest Series!

$15 in advance. AA/Lic. Tickets available BY CLICKING HERE or in person at the eBar.

Sam Coffey & The Iron Lungs are a power pop band from Toronto. Formed by Coffey, a former mechanic's apprentice from Kitchener, Ontario, with its members collected from various Ontario small towns, they rapidly ingratiated themselves with Toronto's punk scene. The band released a stream of DIY singles before signing to Oakland punk/garage rock label Southpaw Records (Ty Segall, Young Guv) for their Gates of Hell LP in 2014, which received praise from outlets like Pitchfork, Spin and Noisey. Touring extensively and playing with bands like Redd Kross, Black Lips, Screaming Females and The FLAMIN' GROOVIES, Sam Coffey & The Iron Lungs have become regulars in DIY venues up and down the East Coast.

In 2017 the band signed to Dine Alone and Burger Records to release their self-titled album. Working with producer Alex Bonenfant (METZ, Crystal Castles) the album embraced Coffey's abiding love for, and near encyclopedic knowledge of 70s glam and power pop in the interest of evolving past the band's garage roots. Showcasing a potent brand of guitar pop that draws influence from a broad swath of the genre's history, including acts like Big Star, Dwight Twilley, Cheap Trick, Teenage Fanclub, Kiss, The Undertones and The Exploding Hearts, the album revels in a rough and anarchic feel, best exemplified by Coffey's impassioned wail of a singing voice, while displaying a deft and at times sophisticated approach to songwriting and arrangement.

With the album the band found success on the radio for the first time, with their singles "Talk 2 Her", "Tough", and "First Time" charting on the rock and alternative charts. This success launched them into bigger venues across North America, burnishing their reputation as a thrilling live band while touring with Billie Joe Armstrong's The Longshot, The Dirty Nil, The Flatliners, Frank Turner, and The Sheepdogs. The band are currently at work on their follow up album, due out in the fall of 2019.

I like other things but right now that’s what I really like. I have too many guitars that I can’t play all that well but I like being around them. I like the way they look and they feel and they sit on their stands against the fireplace in my apartment that doesn’t work. I’ve always liked touching a guitar, having it hang off me from it’s strap like a dead limb – I’ve never been that great of a guitar player but that’s fine and every day I keep picking the things up and making noise and writing words to that noise. I’ve done it almost every day since I was in grade 7 and I was given a Harmony Bobcat from my stepdad and mom in lieu of a drum set (which I really wanted) and I’ll probably do it in some function until the day that I die,. It’s just part of who I am. It’s how I process life and diagnose feelings that like to hide wander around in those areas we don’t like to go so much. Some songs are good and some songs aren’t – but that shouldn’t stop them from being written. I write. And if writing makes you a writer then I am a writer.

I’m Drew Thomson, I like flip flops, adidas track pants, collecting guitars, Okkervill River and I am a writer.